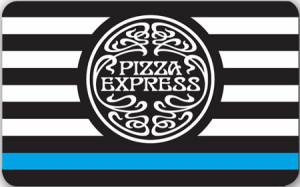 Pizza Express was founded in London in 1969 by Peter Boizot who was inspired to bring a pizza oven and Italian chef back from a trip to Italy.  The chain expanded and through an association with jazz music (the brand offers Jazz nights regularly at several of its restaurants to this day).  The restaurant offers Italian style pizzas that are lighter than the American-inspired pizza available elsewhere, together with Italian inspired starters, desserts and drinks.  Their dough balls are a perennial favourite.

Pizza Express now have over 400 restaurants and occasional “pop-up” restaurants.

Where can I check my Pizza Express gift card balance?

You can also check your Pizza Express gift card balance at any of their restaurants.

Where can I buy a Pizza Express gift card?

Pizza Express gift cards are available at any of the 400+ restaurants, and selected supermarkets including Sainsburys and Tesco.  Tesco often have special offers on Pizza Express giftcards in store and online, meaning you can get up to 20% off the face value of the cards from time to time.

Yes – if the card is not used for 18 months, any balance on the card will be lost.

Anything else I should know?

You can use Pizza Express gift cards to pay bills at the restaurant even when claiming a special offer, such as the Nectar “buy one get one free” deal, or other discounts available from time to time through the Pizza Express offers page.  So if you’ve managed to get your giftcard at a discount, so much the better! 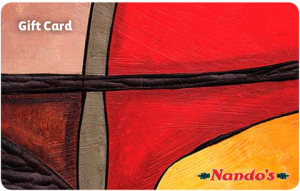 Nando’s hails from South Africa and operates over 280 UK branches, the first of which was Ealing. It employs well over 8000 happy staff in the UK and has won a Sunday Times “Best Places to work” award. The restaurants are decorated with original works of art, normally from South Africa, and the chain claims to house the largest single collection of South African artworks in the UK. The food offering is based around the famous Nando’s Piri-Piri chicken which is of Mozambican-Portuguese origin. Nando’s can justly claim to be a genuinely international restaurant brand, having stores in Australia, India, New Zealand, the UAE and Nigeria, to name but a few of the countries currently served by the company.

Can I get a Nando’s Black Card?

Legend has it that the very rich, very famous or very cool can be issued with a ‘Nando’s Black Card’ which entitles them to free food in return for being seen in their restaurants. This might be the stuff of gossip mags, or might just be true. Needless to say we don’t have one, but if Nando’s would like to send us one…. Still, the next best thing to this hallowed ‘Black Card’ would of course be a Nando’s gift card – a very popular gift choice as Nando’s is genuinely a very tasty place to eat.

Where can I check my Nando’s gift card balance?

You can check your Nando’s gift card balance by handing the card to the staff at the till at any Nando’s branch.

Where can I buy a Nando’s gift card?

The cards are available to buy at any Nando’s store.  Click here to find your nearest Nando’s.

Where can I spend my Nando’s gift card?

As you might expect – in Nando’s!  There are not spendable anywhere else.

Anything else I need to know?

If you register your Nando’s giftcard online and subsequently lose the card, you can contact the company for a replacement.  If you lose the card and haven’t registered then unfortunately they cannot replace it for you, so look after it as you would cash.

The Nando’s gift card will expire 18 months after the last transaction. Any balance left on the card if it expires is lost.  You can check your balance and the date of the last use online here.  A balance check does not reset the validity period of the Nando’s card, but if you’re not ready to use it and it’s nearing expiry then you can always pop into a Nando’s store and top it up. 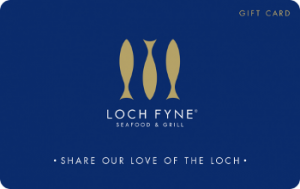 Loch Fyne Seafood and Grill operates out of 37 locations in the UK, predominantly grand old buildings in cities and large towns.  You can find a full list of Loch Fyne restaurant locations here.

Where can I check my Loch Fyne gift card balance?

You are also able to get a balance enquiry at any Loch Fyne restaurant, or connected Greene King pub.

Where can I spend my Loch Fyne gift card?

The Loch Fyne gift card can be spent at any Loch Fyne restaurant in the UK, but also other restaurants and pubs within the Greene King group, which currently includes Hungry Horse, Old English Inns, Belhaven, Eating Inn, Local Pubs, We Love Flame Grill and Greene King Meet and Eat.

If the card is unused for a period of 2 years, it will expire and any balance remaining will be removed and lost.

Where can I buy a Loch Fyne gift card?

You can pick up a Loch Fyne branded card at any one of their restaurants in the UK, or online at https://lochfyne.gkgiftcards.co.uk/gift-cards/loch-fyne-seafood-grill   Please note there is a charge of at least £1.70 for delivery.

Greene King gift cards are also welcomed at Loch Fyne, and these can be bought at several gift card retailers, including Tesco supermarkets. 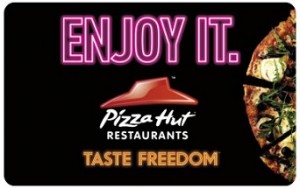 Pizza Hut was founded in 1958 in Kansas, USA by students Dan and Frank Carney who borrowed $600 from their mum to finance the first restaurant. Pizza Hut now has over 11,000 outlets Worldwide, including over 700 in the UK.

The first UK Pizza Hut was opened back in 1973 in Islington, North London.

Where is my nearest Pizza Hut?

You can find out whether there is a Pizza Hut near you on this page.

Where can I check my Pizza Hut gift card balance?

Where can I buy a Pizza Hut gift card?

You can purchase Pizza Hut gift cards at any Pizza Hut restaurant in the UK.

Anything I need to know?

The Pizza Hut gift card expires 12 months after being issued, regardless of any purchases made.  So you need to spend the full amount within a year, otherwise you will lose it.

It’s not really relevant to the gift card, but check out this TV commercial from the dim distant past where Jonathan Ross and Caprice advertise the then new Stuffed Crust Pizza ! 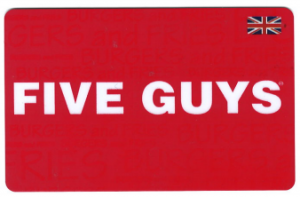 Founded by Janie and Jerry Murell in the United States (Arlington, Virginia) in 1986, the original “Five Guys” were Ben, Chad, Jim, Matt and Jerry – Ben, Chad, Jim and Matt being Jerry and Janie’s four sons.

The concept proved very popular and after expanding throughout the US, Five Guys first hit the UK in Covent Garden, London, in 2013.

The rest is history I guess – they’ve expanded rapidly in the UK and now have 27 restaurants in the UK – and growing.

Five Guys food is a real treat – yes, it’s more expensive than more run-of-the-mill quick serve product, but it’s also in a different class.  Burgers are made to be devoured, delicious, juicy with tasty toppings that actually taste like the ingredients.  The fries are made with care, fried in peanut oil with crisp skin on shells and a fluffy inside like mashed potato.  Can you tell we’re big fans of Five Guys, by any chance?

The Five Guys within Birmingham New Street station also serves breakfast.  Having not sampled this, we can only guess at what delicious breakfast offerings are on hand.  It’s almost worth getting on the train to Brum just to find out.

Where can I check my Five Guys UK gift card balance?

You can check your balance online on this page of the Five Guys website.

Where can I spend my Five Guys gift card?

If you like delicious, fresh and amazingly tasty burgers then you’ll already know where all the Five Guys stores are in the UK, but just in case you need a reminder;

The Five Guys gift card automatically expires 2 years after last being used or topped up. However, given how tasty their food is, you won’t let that happen will you?

Where can I buy a Five Guys UK gift card

Currently, the only place to buy these is in the stores themselves.  So if you want to buy one for a friend, you’ll just have to go down to a store.  Sadly, this means you will be tempted to buy some food.  Can’t help that, them’s the breaks mate.

Where can I get Five Guys UK coupons and discounts

No use searching Groupon or Living Social for Five Guys coupons I’m afraid: they don’t do discount.  In fact, it’s Five Guys policy not to offer discount coupons or offers – they feel discounts in price are discounts in quality.  The only way to get free Five Guys is to work for them.  No wonder their staff look so chipper.